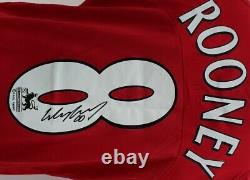 He was given the number 10 shirt in 2007-08. A wonderful full and unrushed Rooney autograph. Below is an example of the COA you will receive. Your COA will match your item.

A Footy Autographs certificate of authenticity will be vital should you ever wish to resell your memorabilia in the future so keep your COA safe. We always aim to respond to messages within 24 hours however you will often get a reply within the hour. This item is in the category "Sports Memorabilia\Football Memorabilia\Autographs (Original)\Signed Shirts\Premiership Players/ Clubs".

The seller is "footyautographs-com" and is located in this country: GB. This item can be shipped worldwide.