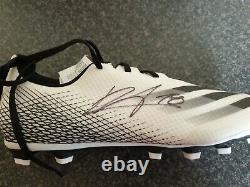 On offer here is a Bruno Fernandes SIGNED Manchester Utd Adidas Football Boot. It is a Size 10.

Bruno Signed this Boot at Old Trafford prior to a Utd Game when the players park their cars to go to the hotel. I have tons of Memorabilia I will be listing in the coming weeks mainly from the sporting world but also movie items.

Signed Football mostly from Legends to current. Liverpool, Man City and Man Utd mainly as I'm based in the North West but as I'm involved in quite a few Private Signings I have plenty of Arsenal, Chelsea, Spurs also. All my items come with COA and in most cases photo proof.