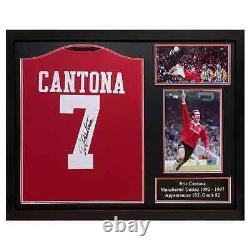 Cantona, affectionately nicknamed by Manchester United fans as "King Eric", is often regarded as having played a key role in the revival of Manchester United as a footballing force in the 1990s. He now enjoys iconic status at the club. This is a official 2019/20 Manchester United shirt personally signed by the "Le King" Eric Cantona, at a signing session carried out and attended by Allstarsignings in Lisbon on 24th September, 2021. Professionally framed to an overall size of 80x60 cm. Delivered with an Allstarsignings certificate of authenticity which will have photographic proof inserted into it. Please note: Signature position may vary. This item is in the category "Sports Memorabilia\Football Memorabilia\Autographs (Original)\Signed Shirts\Premiership Players/ Clubs". The seller is "thevault26" and is located in this country: GB. This item can be shipped to United Kingdom.