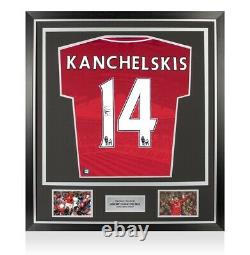 Due to the fact that every signed item we sell is hand signed the image displayed of the product is used as an example - the signature size, position and style may vary slightly. Approximate size: 34.5 (H) x 30.5 (W) x 1 (D) inches. Every signed product is issued with a Certificate of Authenticity (COA), which guarantees that every item has been hand-signed. The certificate includes many security features to avoid duplication and protect your investment. Below is an example of our Certificate of Authenticity.

Video proof - We have developed a unique style of authentication video, which creatively showcases both our products and our connection to the players who sign for us. Verifiable company history - A1 Sporting Memorabilia has a long history supplying memorabilia.