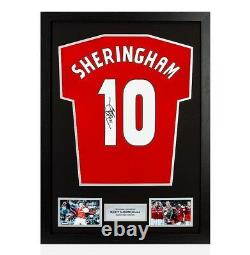 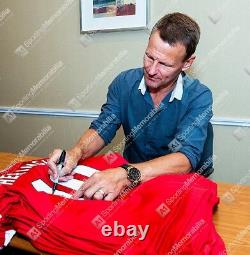 These modern (2015/2016) Manchester United shirts are printed with the classic retro Sheringham number 10 and signed by Teddy Sheringham himself in black permanent marker pen at a private & exclusive signing session with A1 Sporting Memorabilia on 17/07/2018 in London. Every signed item we sell is genuinely hand signed.

Due to the fact that every signed item we sell is hand signed the image displayed of the product is used as an example - the signature size, position and style may vary slightly. Approximate size: 34.5 (H) x 24.5 (W) x 1 (D) inches.