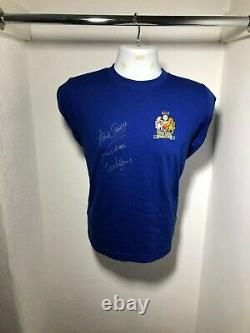 The tournament organised by UEFA for the champions of European Leagues. The final was contested by Benfica or Portugal and Manchester United of England, with Manchester United winning 4-1 after extra time. Making Manchester United the first ever English team to win the European Cup. These shirts were signed at The Pride of All Europe - 1968 European Cup Victory Celebration - 50th Anniversary Gala Dinner held on Sat 12th May 2018 at'The Point', Lancashire Cricket Club. T is the official Manchester United Supporters Trust (Google us) - a non-profit fans organisation - owned and run by our members - passionate Manchester United supporters.

We have more items and special discount offers available from our website shop - search for "Manchester United Supporters Trust: MUST Online Shop" to find us. Follow us on Twitter : mustshop_org. This item is in the category "Sports Memorabilia\Football Memorabilia\Autographs (Original)\Signed Shirts\Premiership Players/ Clubs". The seller is "manchesterunitedsupporterstrust_must" and is located in this country: GB.