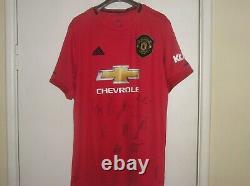 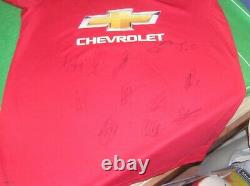 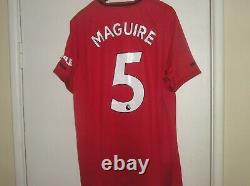 For sale is a mint and unworn adult large sized Manchester United FC 2019/20 season home shirt, which has been clearly autographed in permanent black marker by thirteen First Team players, namely. Mason Greenwood / Aaran Wan-Bissaka / Luke Shaw / Diogo Dalot / Daniel James / Victor Lindelöf / Fred / Scott McTominay / Lee Grant / Axel Tuanzebe / Sergio Romero / Tahith Chong and Andreas Pereira. The shirt has Harry Maguire's name and number on the back as it was initially intended to get Harry to sign them, however he gave us the slip and so they were squad signed as a Plan B. It is acknowledged that a fair few back-up players have signed this shirt and so it has been priced accordingly.

The seller is "crickfox" and is located in Leicester. This item can be shipped worldwide.