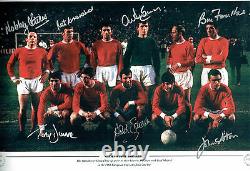 About the Item On offer here is a signed photo of 1968 Manchester United Cup Winning Squad. Bill FOULKES, John ASTON, Alex STEPNEY, David SADLER, Tony DUNNE, Paddy CRERAND &. The 1968 European Cup Final was a football match played at Wembley Stadium on 29 May 1968 to determine the winners of the 196768 European Cup, the 13th season of the European Cup, a tournament organised by UEFA for the champions of European leagues. The final was contested by Benfica of Portugal and Manchester United of England, with Manchester United winning 41 after extra time.

The first half passed without incident, but eight minutes into the second half, Bobby Charlton opened the scoring for Manchester United with a rare headed goal. However, the lead only lasted for 22 minutes before Jaime Graça scored for Benfica.

Benfica almost had a chance to win the match near the end of normal time, but goalkeeper Alex Stepney made a crucial save during a one-on-one with Eusébio. The score remained at 11 until the end of normal time, forcing the match into extra time. The temperature was clearly playing a part in the players' fitness, and Benfica's players were clearly flagging when George Best put United in the lead again three minutes into extra time.

Picking up the ball 25 yards from goal after the Benfica players failed to deal with Stepney's long kick downfield, Best broke into the penalty area and dribbled round the goalkeeper and rolled the ball into an empty net. Brian Kidd, who was celebrating his 19th birthday, added United's third a minute later, before Charlton rounded off the scoring before 100 minutes had been played. United were without their high-scoring forward Denis Law, who was sidelined with a knee injury and watched the match on television while in hospital. United's win meant that they became the first English team to win the European Cup, just a year after Celtic had become the first British team to do so. The win also marked the culmination of Manchester United's 10 years of rebuilding after the 1958 Munich air disaster, in which eight players had been killed and manager Matt Busby had been left fighting for his life.

Captain Bobby Charlton and Bill Foulkes who had both survived the crash played in the game. The signature is an original and authentic autograph given by the person listed above. The size of the photograph that has been signed is 18 x 12 inches.

This was signed as part of a Private signing where a small amount of this photograph was signed. The Signed photo you receive may be the one photographed or one from the same signed Image. This is a standard size of photograph worldwide so you will easily be able to find a frame or mount for this item if you wish to.

About the Certification The item comes with a COA (Certificate of Authenticity) from us (2.4 Autographs). We are AFTAL Approved Dealer No. This item was obtained, in person, by us or on our behalf. We will package the item safely and use the appropriate service (listed below) to get your item to you as soon as possible.

However, we also accept cheques and postal orders. The item "Multi Signed 1968 Manchester United Squad 18x12 Autograph Photo AFTAL COA RARE" is in sale since Sunday, May 10, 2015. This item is in the category "Sports Memorabilia\Football Memorabilia\Autographs (Original)\Signed Photos\Retired Players". The seller is "matrix-frames-autograph-store" and is located in Sheffield. This item can be shipped worldwide.