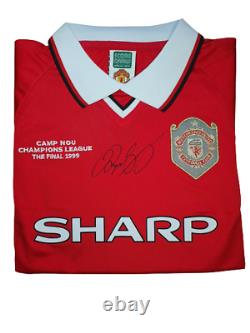 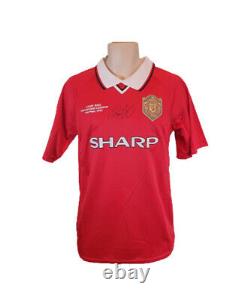 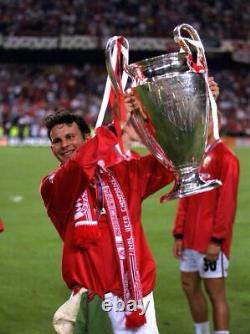 We are able to offer a great chance to own a fantastic piece of memorabilia, signed by the one and only Ryan Giggs. The shirt is an official replica 1999 Manchester United Champions League Final shirt signed by Ryan himself on the front of the shirt and comes with a certificate of authenticity. Ryan lifting the Champions League Trophy as Manchester United became the first and only team to complete The Treble. Ryan signing our shirts at Hotel Football.

T is the official Manchester United Supporters Trust (Google us) - a non-profit fans organisation - owned and run by our members - passionate Manchester United supporters. We are recognised by MUFC, the FA, the PL and national fan organisations (FSA/Supporters Direct) and registered with the Financial Conduct Authority - with offices at 18 Sir Matt Busby Way just a stone's throw from Old Trafford. All our items can be collected free of charge if preferred (see below). All shirts come with a Certificate of Authenticity. All our items can be collected FREE OF CHARGE from MUST HQ in office hours and for 3 hours before home games. We're next door to the MUFC stadium at 18 Sir Matt Busby Way, MANCHESTER M16 0QG. Office hours - please call 0161 872 3300 to ensure we are open before starting your journey but usual hours are. MONDAY- FRIDAY 10.30AM - 6.15PM.

We have more items and special discount offers available from our website shop - search for "Manchester United Supporters Trust: MUST Online Shop" to find us. Follow us on Twitter : mustshop_org. This item is in the category "Sports Memorabilia\Football Memorabilia\Autographs (Original)\Signed Shirts\Premiership Players/ Clubs". The seller is "manchesterunitedsupporterstrust_must" and is located in this country: GB. This item can be shipped to North, South, or Latin America, all countries in Europe, all countries in continental Asia.