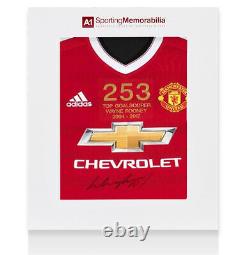 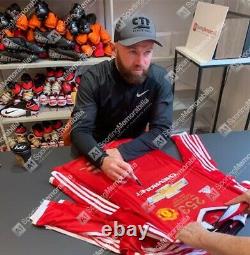 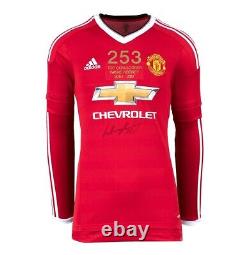 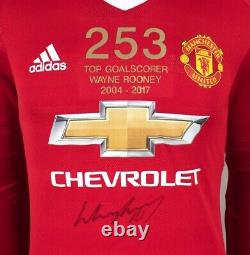 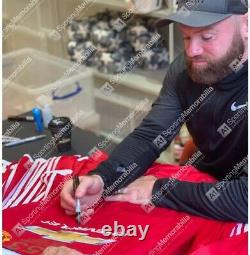 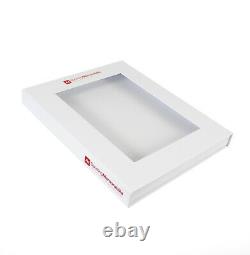 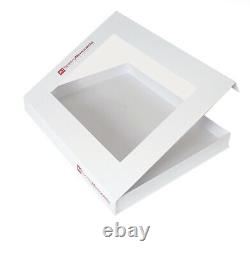 Wayne Rooney Front Signed Manchester United Shirt - Special Edition 253, Top Goalscorer - Gift Box - Signed Sports Memorabilia - A1 Sporting Memorabilia. Wayne Rooney Front Signed Manchester United Shirt - Special Edition 253, Top Goalscorer - Gift Box. This special edition Manchester United player issue Adizero Adidas 2015-16 home shirt has been printed with special gold text commemorating Wayne Rooney's amazing achievement to become Manchester United's leading goalscorer with 253 goals. The shirt has also been personally hand signed by Wayne Rooney himself at a private and exclusive signing session and features a perfect example of Wayne Rooney's autograph. This fantastic shirt is a real collectors piece and was signed at a private and exclusive signing session in Manchester on 09/07/2020. Each item comes complete with its own official certificate of authenticity which serves as proof that your item is 100% genuinely hand signed. Presented in our premium A1 Sporting Memorabilia gift box that not only keeps your prized memorabilia protected, it is also ideal for special gifts and events. Every signed item we sell is genuinely hand signed. Due to the fact that every signed item we sell is hand signed the image displayed of the product is used as an example - the signature size, position and style may vary slightly. Approximate size: 15 (H) x 12.5 (W) x 1.5 (D) inches. Every signed product is issued with a Certificate of Authenticity (COA), which guarantees that every item has been hand-signed. The certificate includes many security features to avoid duplication and protect your investment. Below is an example of our Certificate of Authenticity. With the marketplace now flooded with fakes it is very difficult to distinguish between genuine items that have to potential to increase in value and worthless counterfeits. A1 Sporting Memorabilia puts its name to every item because all of our signed items are 100% genuinely hand-signed. We conduct official signing sessions, where every star is paid for each individual signature. There can be no marketplace without these sportsmen, so we consider it fair to pay them for their signatures.

Certificate of Authenticity - Each item comes with a COA issued by A1 Sporting Memorabilia. Private signing sessions - Ideal conditions for best examples of perfect autographs.